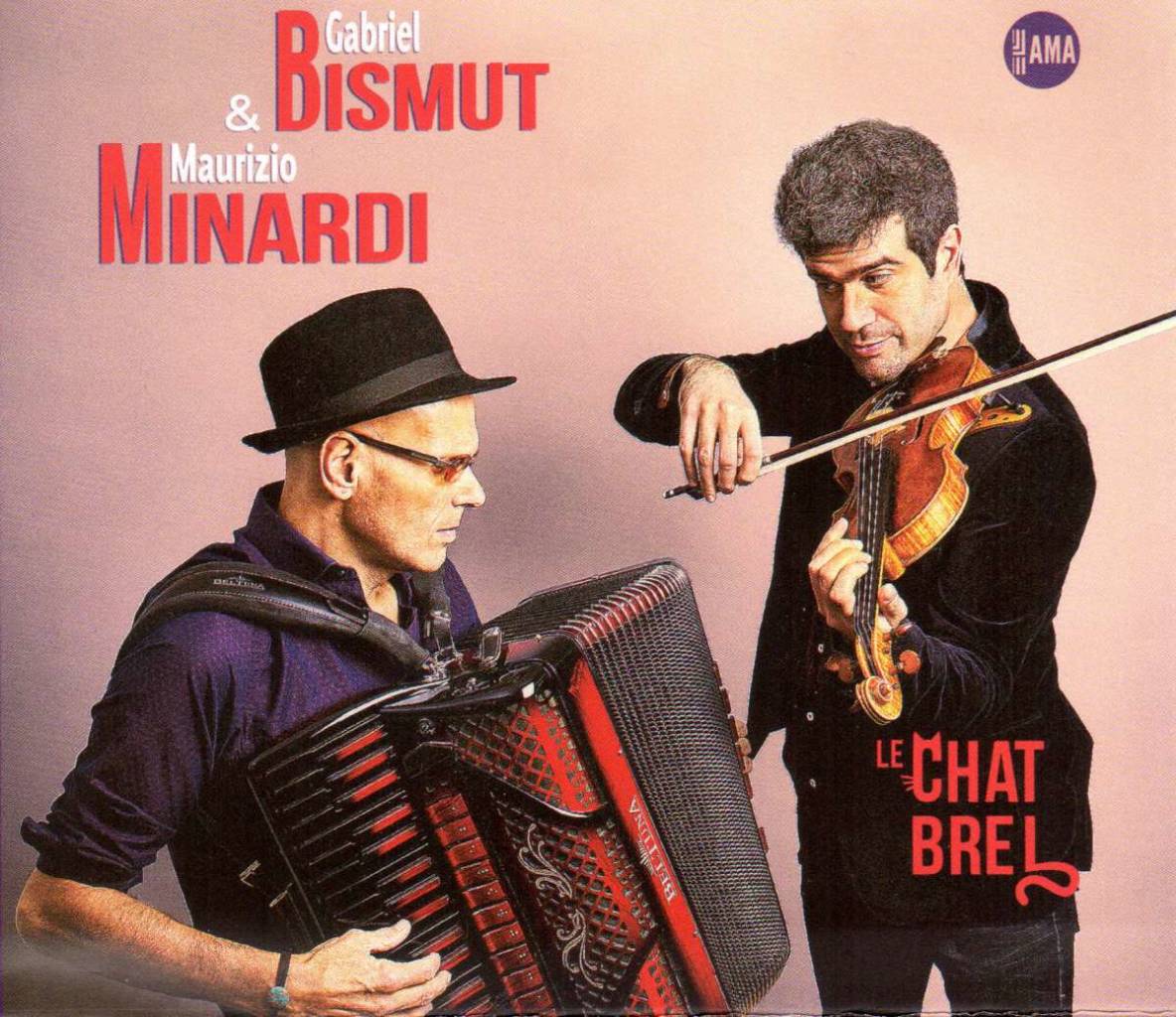 Few accordionist have such a unique voice as Maurizio Minardi.  His music is instantly identifiable and this is despite drawing on diverse musical characteristics and language to achieve his persona as a composer/musician.  Minardi is an accordionist and pianist and whilst still in Italy he played piano for the fabulous Jazz accordionist Simeone Zanchini as part of the Quartetto Magritte in the album Aspettando Cofferatzinger and then he came to live in London where he set up his own quartet with Nick Pini on bass, Jason Reeve on drums and Shirley Smart on violin with whom he recorded another fabulous album The Cook, The Clown, The Monk and the Accordionist. about to years ago he decided to leave London and moved to Paris where he is very active today.  The restlessly creative Minardi has given us yet another fabulous album in Le Chat Brel.  This time he shares billing with violinist Gabriel Bismut who composed half od the pieces on this gem of an album.

I knew it was a good album when one of my teenage daughters (one’s kids are always the harshest of critics when hearing what their parents listen to) came and asked me what it was I was listening to because she really liked it. My daughter not only listens to the usual teenage fodder of “grime” and “drill” but she also played violin and viola in a youth orchestra and listens to all sorts of music so I’m pleased to say she has a discerning ear. . Each track is exquisitely recorded and beautifully expressive and musically and dynamically played.  Minardi’s accordion sounds gorgeous throughout from the neo-Baroque Le Coq Baroque and Tulipano Nero (which some may remember from the Aspettando Cofferatzinger album) to the bluegrass–flavoured Anastasia, and from the distinctly French-feel of Persévérence and La Brume to the quirky classic Minardi track Penguin reworked here from his previous London album on which it also featured.  Bismut’s violin playing is superb throughout and he demonstrates his ability to write well too and even in a quirky style in the aptly-named Bipolarité.  Guitarist, Bartélamy Seyer, makes some wonderful wonderful interjections throughout and a particularly striking one is during Le Coq Baroque where he breaks the Baroque theme with his jazz phrasing in a superb way.  Maurizio Congiu is solid and excellent throughout both in pizzicato and in bowing and adds some great slapping to the hoe-down feel in Anastasia.

The album finishes on a typically Minardi-esque note with Marcello,a piece that starts with what sounds like the rhythm of a klezmer hora but then has some wonderful jazz licks on the violin which hark back to gypsy jazz and a particularly blistering intervention from Minardi himself using his bandoneon register.

A highly recommended album by and artist and his musicians at the peak of their creative and executive powers with something in it for all tastes but without resorting to nostalgia in any way. The album is fresh and one wants to listen to it over and over again.