Accordion teachers, students, professionals, composers and UKAAT supporters packed into the Henry Wood Room for UKAAT’s first workshop on February 7th 2016 at the Royal Academy of Music. The day kicked off with a presentation by Romano Viazzani (UKAAT President) outlining what UKAAT’s aims are and what they have been doing since their initial meeting three years ago along with their hopes for the future. 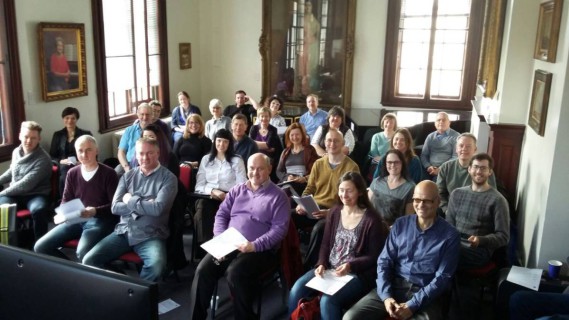 This was followed by a talk and workshop given by Prof. Owen Murray and Romano Viazzani on teaching basic skills to students. Ideas on all manner of basic skill teaching from posture and confidence in performance to finer points such as articulation and bellow skills were covered with participation from the workshop-goers.  A video clip was also shown to demonstrate the  freedom that comes with good posture. Some exercises were put forward to help improve certain aspects of playing as well as some ideas for chord combinations on standard “Stradella” bass. After a mid morning break the workshop continued explaining how free bass works and its ever increasing importance in the world of Music.  Several systems were explained with Prof. Owen Murray drawing comparisons between the C Griff System Free bass system and the mirror image of the C System Right-hand button-board.  Then Vice President Ian Watson spoke on the B griff System and it’s relationship to the right-hand B-griff button-board. Various diagrams and technical exercise fingerings were made exclusively available to attendees for download. 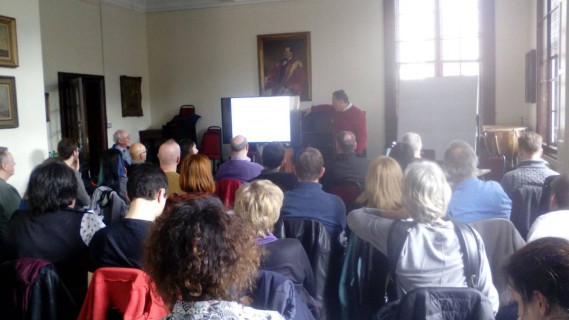 The end of the morning session was rounded off with a short concert by the tremendous students of the Royal Academy of Music’s accordion department. Ben de Sousa and Soprano Elly Broomfield kicked off with an impactful Haydn’s Benedictus from “Little Organ Mass” and Music for a while by Henry Purcell.  Then Inigo Mikeleiz-Berrade played a beautiful and authentically Spanish, Albeniz’s Cordoba followed by Franck Angelis’s Study on Chuiquilin de Bachin. More chamber music followed next with Iosif Purits supporting Cecilia Bignall on cello for J.S Bach’s Sonata for viola de gamba and harpsichord and Manuel de Falla’s Suite Populaire Espagnole. As if almost to underline the topic of dynamic-shaping and articulation covered in the earlier workshop, this performance was an object lesson in how the accordion’s left-hand can ably support a cello to the point of almost believing there was another cello playing with this duo, so well crafted was Purits’s control of the lines played on his free bass. A very mauture performance of Domenico Scarlatti’s Sonata in A major and Zolotaryov’s Sonata No.3 followed and was so appreciated by the cheering audience that brought Bartosz Glowacki back on for a curtain call.  Finally, a blistering performance of Rodion Schedrin’s short piece Toccata by Iosif Purits.

After a pause for lunch, Roland Williams gave a brief talk on a recent book he and Owen Murray translated and compiled about the life of Toralf Tollefsen (available form this site) and some wonderful archive recording of Tollefsen was heard music to the audience’s delight. 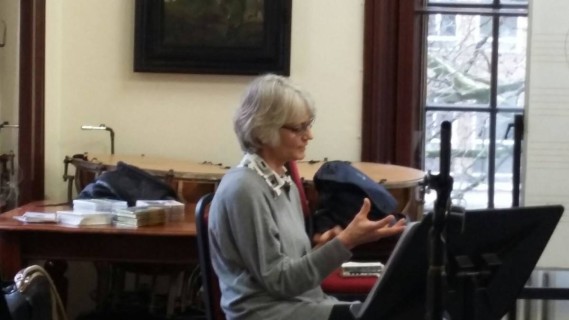 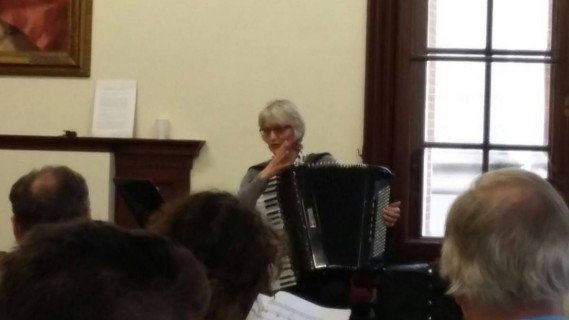 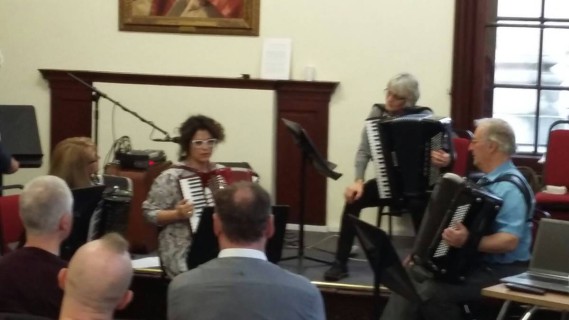 Once the initial shyness wore off the accordions were donned by the workshop participants for the very enjoyable and informative workshop given by Karen Street on her rather unique way of playing jazz using almost exclusive free bass. Attendees found the similarity between the way Ms Street plays and the jazz voicings pianists use in their left-hand, particularly stimulating.  Then Simone Zanchini and Karen Street combined to get everyone improvising.  The RAM students who had played earlier also joined in and gave jazz a try too which was very pleasing to see.  Karen Street then gave us a wonderful performance of her solo playing so the audience could fully experience what her sound is really like which was much appreciated by the audience and Mr Zanchini alike. 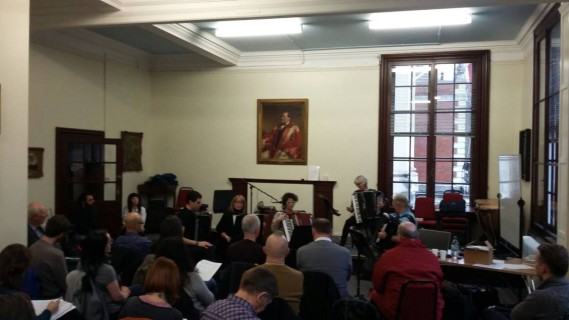 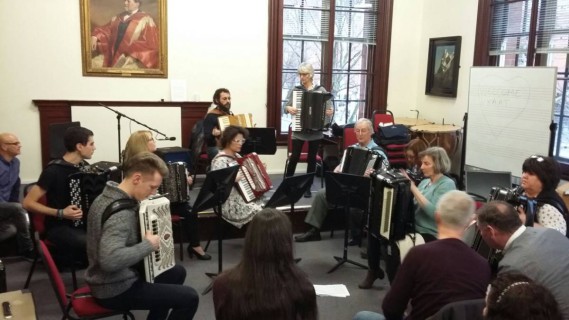 Finally, Simone Zanchini gave a talk on his approach to improvising, what his influences were and some of the jazz accordion greats he had the fortune to play and record with.  He also gave us an insight into his idea of sound and the acoustic experiments and innovation he has incorporated into his accordion.  He talked of the importance of confidence in delivery and sound projection when improvising and the inevitable practise that goes into learning the “coding” of the different styles and genres of music he calls upon during his improvisations some of which he owes to his classical training at Pesaro conservatoire under Sergio Scappini.  He rounded off with a jaw-dropping 30-minute improvisation incorporating many of the jazz styles he had spoken about during his talk. 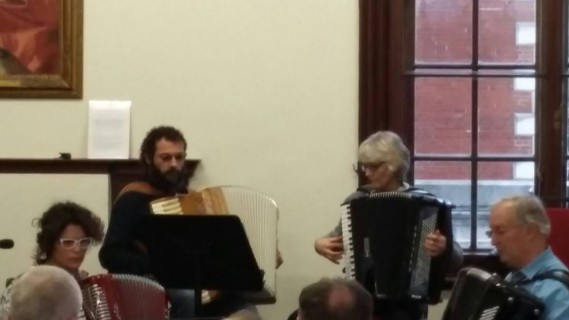 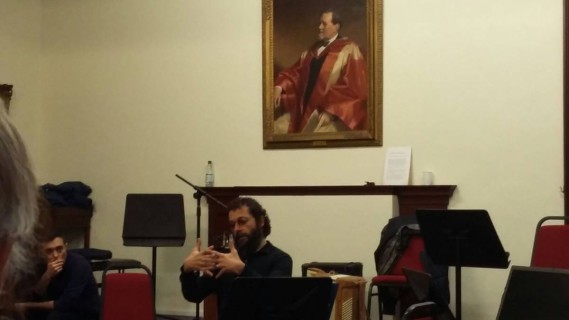 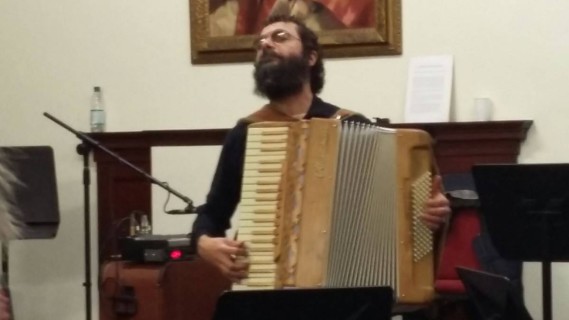 Happily, all the feedback about the event was very positive indeed and it was felt that generally there is a need for this type of workshop and that they should happen more often. 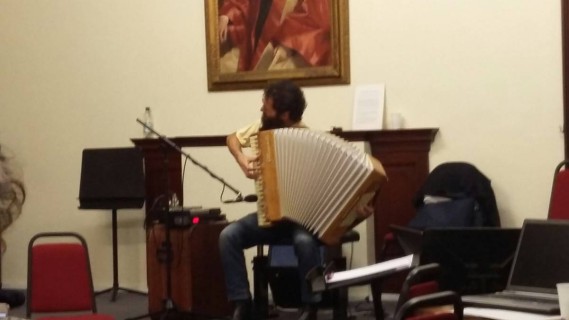 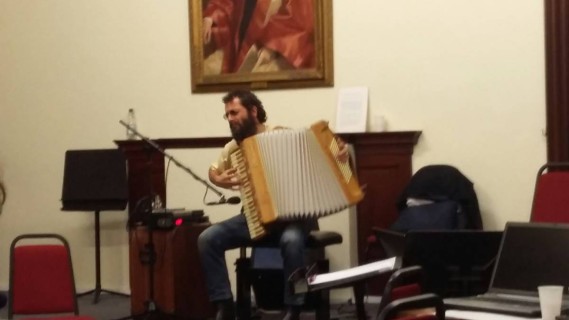