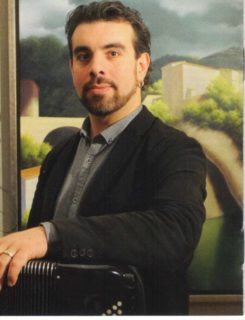 Jacomucci is nothing if not consistent in his production of excellently researched and interpreted music. He is not only a master performer but a wonderful teacher and author of books on contemporary accordion development and mastering accordion technique. In this new album he hits the spot again with this album of mostly transcriptions from works originally intended for other instruments or groups of instruments. His interpretation of the 8 contrasting pieces in the suite by Claudio Monteverdi makes one wonder why not more music from the Renaissance isn’t played on the accordion. There is so much energy, sensitivity and dynamic shaping in this interpretation that it is as if this music was written for the instrument. There are two original works for classical accordion too, Passing by Martin Lohse and one which closes the album by Jacomucci himself dedicated to his dear canine companion, Lupo (“Wolf”) who was by a strange twist of fate killed by a wolf. The Lohse contrasts sympathetically with the Monteverdi that precedes it and its delicacy sets us up beautifully for the three Scarlatti sonatas that follow it.  Jacomucci is a master of Scarlatti. He builds up slowly with the mournful K87, then up a notch to the K380 and ending with the scintillating K17 which show remarkable virtuosity both in technique, delicacy and in the detail of his ornamentation and dynamic shaping. His thrilling fast passages are like whizzing Catherine Wheels spinning off a rocket in the night sky.

Wonderful to see a work by British composer Elgar in the shape of Nimrod from the Enigma Variations, the piece which in the UK has associations with remembrance and reflection on the dead of two world wars for many. The English theme is continued in the English Nightingale by Van Eyck from the early Baroque period, an unusually descriptive piece for the period which demonstrates great mastery technique and dynamic control in the mimicking of birdsong. The same amazing control and detail is demonstrated in Scodanibbio’s 20th century piece originally for violin and cello which follows next. In an atonal piece such as this Jacomucci applies the same detailed approach as one would to a Bach fugue to really make the piece really work so that the many interweaving lines produce not only a texture but have complete integrity as if played by individual instruments; not certainly the most natural thing to produce on a instrument which in this case, at times, is behaving like three separate instruments but being powered by only one set of lungs – the bellows. Jacomucci propels us straight back to the late Renaissance for John Dowland’s lamenting Lacrimae Antiquae transcribed by Jacomucci, like most of the pieces on the album, from a score which, in this case was in 5 parts and recalls the sonority of the yet to be invented Harmonium coupled with the expressiveness of the viols of the period. Ligeti is up next and a transcription from works for organ here scored for two accordions, with is mass of sound surrounded by a host of trills and other devices recall the spinning atomic particles around a central solid body rather echoing, albeit in a different way the spinning Catherine Wheels of the earlier Scarlatti. Next up is some rather more obvious “counterpoint” if the form of Bach’s Contrapunctus XIV and here Jacomucci’s clear mastery of the form echoes his earlier masterpiece album of Johann Sebastian Bach. And so to the last piece in the album, the aforementioned Ballad for Lupo, a fitting end to an album which speaks of the emotional end of the life of a dear family pet and composed by Jacomucci himself. Needless to say this album will be one for the collector and student alike and is played with all the flair and good taste that will delight both. Jacomucci places works, from the Renaissance and Baroque period through to the Romantic and Contemporary eras, in counterpoint with each other and the concept works brilliantly. 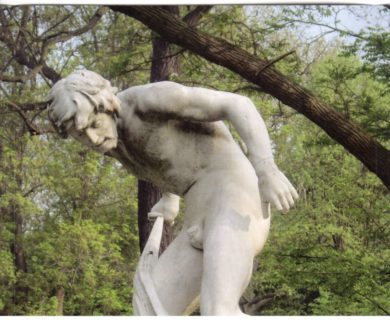 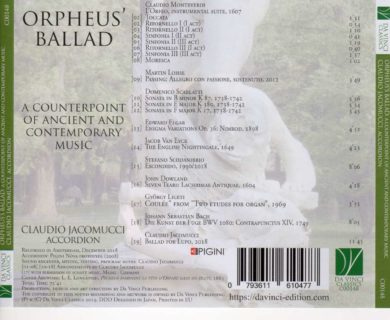