Works by Scarlatti, Bach, Pärt, Gubaidulina, Piazzolla and a piece by Vlasov combined with a striking animation by Magsalena Suszek-Bak
Genesis, debut album of Bartosz Glowacki, includes music from various eras and styles. It features baroque transcriptions by Scarlatti and Rameau alongside a wide range of contemporary accordion works by Trojan, Gubaidulina, Pärt and Vlasov.

The recording concludes with the Double Concerto by Astor Piazzolla, featuring the guitarist Rob Luft and conductor Elias Peter Brown. The electric guitar and accordion emerge from the musical landscape set by the chamber orchestra whose freedom of ornamentation echoes the Nuevo Tango style.

Genesis will be released worldwide on 22nd November 2019 by the record label DUX. Bartosz is very grateful for the generous support of the City Music Foundation who funded the recording of the album.

Described as ‘versatile, full of charisma, characterised by extraordinary care for sound quality’, the accordionist Bartosz Glowacki certainly shows the qualities of a rising star. Winner of numerous competitions, he was awarded the Polish Young Musician of the Year in 2009 and represented Poland at the Young Musician Competition in Vienna. He has performed as a soloist in prestigious concert halls including the Wigmore Hall, the Royal Festival Hall, the Barbican, the Royal Albert Hall, La Salle Cortot and the Witold Lutoslawski Concert Studio of Polish Radio. Recently winner of the ‘Sir John Manduell Prize’ at the Bromsgrove International Competition, Bartosz is a City Music Foundation Artist. He graduated with honours from the Royal Academy of Music and received the Regency Award. 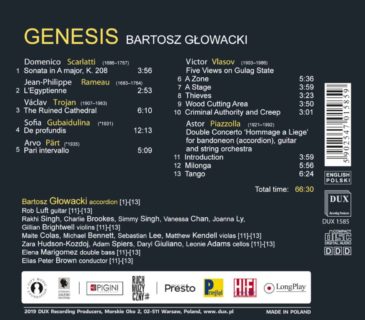