Great to see Royal Academy Student, Ben de Souza is managing to fit in some concerts around his studies. Catch him at a venue near you this autumn.

Rimsky-Korsakov – Piano Quintet in B flat for piano, flute, clarinet and horn

Royal Academy of Music accordionists present their first event of the year. Concert followed by the accordion department open day.

Takahashi – Like Swans Leaving The Lake – accordion and viola 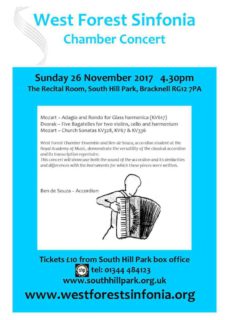 Join the West Forest Chamber Ensemble and Royal Academy of Music accordion student Ben de Souza as they demonstrate the versatility of the classical accordion and its transcription repertoire. Featuring Mozart’s Rondo and Adagio for glassharmonica (KV 617), Dvorak’s Six Bagatelles for 2 violins, cello and harmonium (Op. 47) and a selection of Mozart’s Church Sonatas (K328, K67, K336) for 2 violins, cello and organ, this concert will showcase the sound of the accordion and its similarities and differences with the instruments for which these pieces were written.

Tickets are priced at £10 and available from South Hill Park Arts Centre – http://www.southhillpark.org.uk/